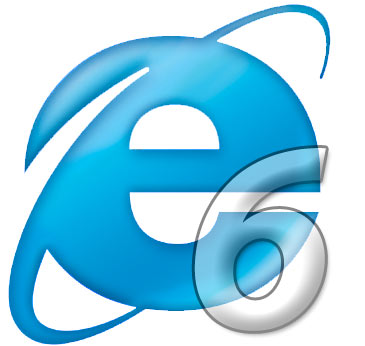 Internet Explorer 6 was originally released in 2001 and you would think that nobody would still be using this version considering there have been 3 newer versions, IE7, 8 and 9 released in 2006, 2009 and 2011 respectively. But still 9.2% of the online world is using this relic, and that’s not 9.2% of internet explorer users, it’s 9.2% across all browsers. Internet Explorer currently powers 52.7% of internet users across the world however I can see this reducing over the coming years due to the introduction of smart phones and tablets. 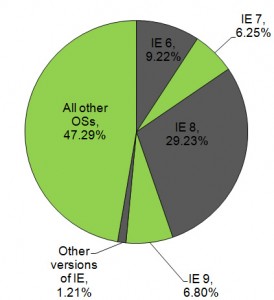 The good news is IE6 usage is on the decline. At the beginning of last year IE6 enjoyed a 17.9% cut of total browser usage, so there has been a clear drop in usage since last year. This will be good news for designers and developers. The reason for this is all browsers behave slightly differently to HTML and CSS rules so it is important to check designs and developments across multiple formats, the one format that always causes problems is IE6 and many, including myself, will welcome its exit.

What’s even better news is 9.2% is a global figure, in the UK only 2.4% of internet users use IE6 and from what we’ve researched it seems mainly to be schools and government bodies. This is due mainly to believed security risks in upgrading from IE6 to a newer version.

Unfortunately it is still worth checking what your designs and developments look like in IE6 as 9.2% is still a large amount. I wouldn’t suggest going out of your way to make it look perfect in IE6 but it is worth checking that the site is functional. A quick way to see how your site looks on IE6 is to use http://ipinfo.info/netrenderer/ as this will give you an instant screenshot of your site in IE5.5 to IE9.

Another option is to add a HTML if statement to display a message if a user visits your site using IE6 or less. You can enter any message you like and could even supply links to allow an upgrade. Please see below code example.

Try and keep your messages clean…